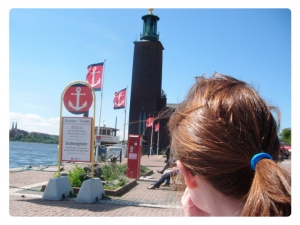 Stockholm was my second home in the months between September 2008 and June 2009.

My boyfriend was studying in the Swedish capital, so the only thing I had to do was pay for flights. When asked if I was venturing anywhere for the summer, I was often faced with an amusing reaction when I’d reply ‘Sweden’. Stockholm is apparently hardly the kind of destination that on first impression screams ‘holiday’, but it was there that I found myself – and it didn’t fail to impress.

Stockholm manages to balance the laid-back attitude of its citizens with the hustle and bustle of the modern day cosmopolitan metropolis. Describing Stockholm to someone who has never been there is arguably relatively easy: Stockholm is somewhere between Paris and London. My other half often says that Stockholm isn’t like Paris, where a select few will look down upon you because you don’t speak French; nor is it like London, where one wrong turn can leave you feeling lost in a maze of unrecognisable streets. No, Stockholm is a ‘happy medium’, stretching across a series of islands in seemingly effortless elegance.

Travelling to Stockholm is simple: Ryanair fly to Skavsta Airport, located about 60 miles south of the city. Getting into the city itself is cheapest by Flygbussarna. At about €12 each way, this coach will take you into the city centre in around 90 minutes. If you feel like flashing the cash in favour of comfort, SAS fly direct to Arlanda Airport. You can catch the Arlanda Express to Central Station and the journey takes about 20 minutes.

Getting around the city is incredibly easy. There are buses, an underground railway known as the T-Bahn and a tram system that will take you to the furthest reaches of the city’s suburbs. Daily, weekly and monthly tickets are reasonably priced, operating on a single purchase or smartcard system. 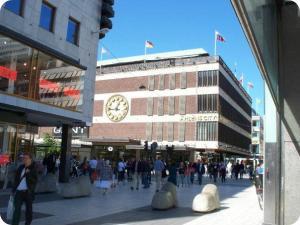 You’ll find an abundance of bars and a vibrant nightlife in the city, most notably around the T-Bahn station at Slussen, while hopping off at T-Centralen will land you in the city centre for a spot of shopping. The big brands are all here, and as the home ground of H&M, Stockholm boasts an array of the famous chain stores.

You won’t find yourself lost in translation at all. Don’t bank on practicing your Swedish in Stockholm, as a taxi driver informed me on day one, almost everyone jumps at the chance to practice their English.  In most shops a simple ‘hej hej’ (pronounced hey hey) provides a warm greeting, whilst ‘tack’ serves to express polite thanks. The Swedish themselves are warm, friendly and polite, and there’s something very welcoming about the people in Stockholm that leaves you feeling as though you’ve just strolled through your own hometown. There are no ‘dodgy areas’ in this city – in fact, even the underground T-Bahn stations fail to prove in any way intimidating or menacing. 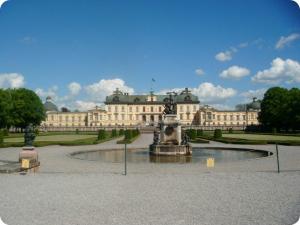 There’s no end of things to do, even when the sun begins to set in the early hours during the winter months. Personal highlights included The Vasa Museum, Skansen and the palace at Drottningholm. In the city centre be sure to check out the Royal Palace, Gamla Stan and Nordiska Kompaniet, Sweden’s answer to Harrods and Galereis du Lafayette. You’ll find vintage gems in one of the city’s best kept secrets, Beyond Retro.

The one thing that still resonates with me about Stockholm is not the sight of the stereotypical blonde, tanned individuals roaming the streets; nor is it the fabulous summer weather that a city so often equated with dark sunless winters seemed to be experiencing. No: the one thing I vividly remember about Stockholm is the sheer volume of pregnant women I came across. Coming a close second, the memories of a phenomenal array of lingerie stores.

Whether there’s any correlation between the two, I’ll leave it to you to decide.

One thought on “Coming Holm”